Resist Forum :: Climate Change - The FACTS :: Feedback Loops - Is This Game Over?

In the not too distant future, scientists predict the Arctic
Ocean will be largely sea ice free in summer - but pinpointing when
is more difficult. But does it matter if it happens sooner rather
than later? Here are five reasons why it might.


Arctic sea ice is declining rapidly, with the seasonal low in summer shrinking
particularly quickly.
Scientists have different ways to predict Arctic sea ice decline.
If melting continues as it has in recent years, it could be as
soon as 2020, but climate models suggest it won't happen until
2040 or later. So far, it's not clear which is more likely -
see here for
more.

But why does it matter how quickly it happens?

Albedo is a measure of how well the earth's surface reflects sunlight.
Snow-covered sea ice has a high albedo and reflects 85
per cent of sunlight. But the open water revealed as ice melts
is darker and absorbs more - reflecting just seven per cent. The
less sunlight is reflected, the more heat the planet absorbs. 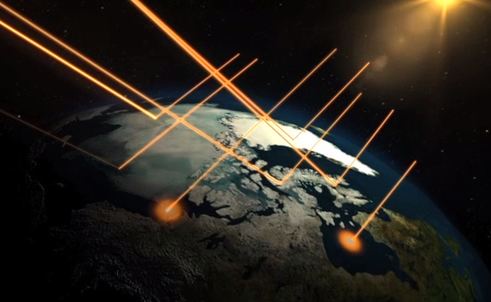 The albedo effect in the Arctic. Source: NASA

"As sea ice retreats, sunshine that
would have been reflected back to space by the bright ice is
instead absorbed by the ocean, which heats up, melting even more
ice."

The heat doesn't only warm the oceans. Francis explains excess
heat entering the oceans during summer is later released back into
the atmosphere - raising atmospheric temperatures too. It's one
important reason why the Arctic is warming faster than the rest of
the planet.

In fact, the loss of reflective sea ice is part of the reason
Arctic temperature has risen
three times faster than the global average in recent decades.
This effect, known as Arctic amplification, has consequences for
nearby land ice, too.

As land ice melts, it adds freshwater to the oceans causing
sea levels to rise, and surface melt from Greenland
is increasing, as the image below shows. Satellite data suggest
over the last 20 years, the Greenland ice sheet has lost
140 billion tonnes of ice per year.

This has raised sea levels by about 7.8 millimetres - 12 per
cent of
total sea level rise in that time. The newest climate models
project that by 2100, Greenland's ice sheet could contribute four
to nine centimetres to sea level.
Earlier estimates had put that figure anywhere between one and
12 centimetres. 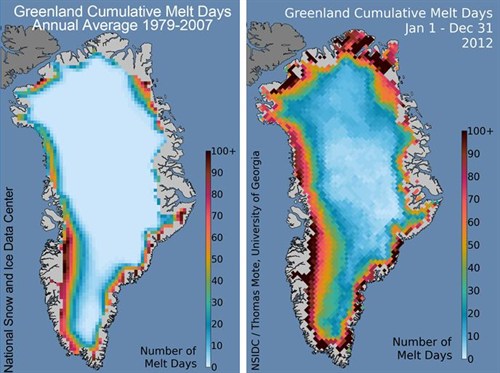 "[S]mall increases in ocean temperature
can quickly destabilise glaciers that flow into the oceans, and so
we could expect further ice losses due to that effect too."

The quicker sea ice loss causes Arctic temperatures to rise, the
faster
the Greenland ice sheet is likely to melt - and while it isn't
going to disappear
any time soon, this contributes more to sea level rise.

Rising Arctic temperatures are
thawing once-frozen ground in the Arctic - known as permafrost.
Scientists are
concerned carbon dioxide and methane released from the
carbon-rich permafrost could cause additional
warming by adding to greenhouse gases already in the atmosphere
- another positive feedback. Frozen methane also exists in methane
hydrates in the sea floor.

But there is a lot of uncertainty about how much carbon these frozen deposits hold,
and how quickly they are thawing. So far, only a small amount of
methane in the atmosphere can be traced to thawing permafrost.
Most results from human activity, like agriculture and
landfill, with a smaller amount released naturally from
wetlands.

At the moment, warming is mainly driven by carbon dioxide
emissions. But the sooner sea ice loss causes land and ocean to
warm in the Arctic, the sooner methane from thawing permafrost
could start contributing more to warming.

Another impact of Arctic and Greenland ice melt could be that
the freshwater runoff into the ocean disrupts part of a major
circulation system known as the Atlantic Meridional Overturning
Circulation (
AMOC). The AMOC carries warm surface water northward, giving
Europe its mild climate. 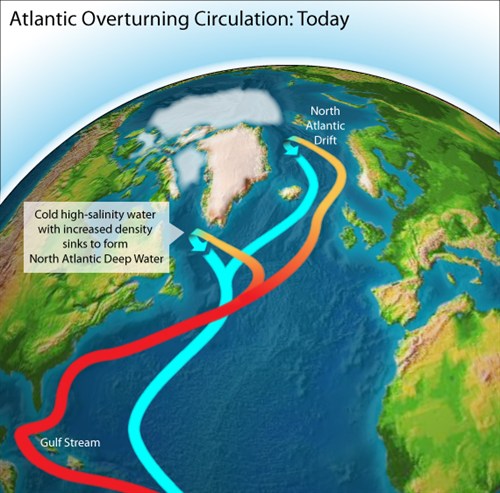 25 per cent by 2100. This is mainly due to changes in
temperature and precipitation patterns, but
scientists say freshwater from melting ice could become
increasingly important with climate change.

Models suggest a slowdown in the AMOC could
cool the northern hemisphere this century, but the effect is
likely to be
outweighed by greenhouse gas warming. But the AMOC is just one
part of a giant conveyor belt
which currently redistributes warmth around the world, so losing
ice could affect regional climates worldwide.

Changes in the strength of the AMOC can also affect
sea ice melt by transporting more or less warm surface water into
the region. So it's a complicated picture and scientists we spoke
to said while the rate of Arctic melting will almost certainly
affect the AMOC, more research is needed to understand the full
extent of the impacts.

As temperatures rise faster in the Arctic than at lower
latitudes, this changes large-scale temperature and pressure
gradients - which has consequences for northern hemisphere winter
weather.

"Global warming has increased the loss
of summer sea ice in the Arctic, which has altered atmospheric
conditions in a manner thatstacks the deck in favor of more severe
winter outbreaks".

The pressure change alters atmospheric circulations, including
the jet stream - a stream of fast-flowing air in the atmosphere. It
also makes the jet stream's path meander more, which allows cold
Arctic air to reach further south, affecting the climate in the
mid-latitudes.

Scientists are just beginning to understand the effect quicker
Arctic sea ice melt could have on northern hemisphere climate.
While it's difficult to attribute any particular event to effects
of the changing Arctic, professor Francis tells us:

"If the summer ice covers disappears
sooner than climate models project, I would expect to see Arctic
amplification intensify sooner, and the effects on the large-scale
circulation would become more conspicuous."

Melting sea ice is likely to have global consequences by
unlocking new
shipping routes and exposing more fossil
fuel reserves. But it's clear that although Arctic sea ice only
covers a small fraction of the earth's surface, there may well be
serious climate-related impacts too.

And it doesn't stop with the climate. The loss of sea ice will
also have consequences for
people and ecosystems
in the Arctic region. As Dr Stephen Vavrus from the Centre for
Climatic Research at the University of Wisconsin-Madison puts
it:

"[T]he longer we can delay the loss of
sea ice cover, the longer we should be able to keep these
consequences at bay".

For scientists studying summer sea ice in the Arctic, it’s not a
question of “if” there will be nearly ice-free summers, but “when.” And
two scientists say that “when” is sooner than many thought — before
2050 and possibly within the next decade or two.

James Overland of NOAA’s Pacific Marine Environmental Laboratory and Muyin Wang of the NOAA Joint Institute for the Study of Atmosphere and Ocean
at the University of Washington, looked at three methods of predicting
when the Arctic will be nearly ice free in the summer. The work was
published recently online in the American Geophysical Union publication Geophysical Research Letters.

“Rapid Arctic sea ice loss is probably the most visible indicator
of global climate change; it leads to shifts in ecosystems and economic
access, and potentially impacts weather throughout the northern
hemisphere,” said Overland. “Increased physical understanding of rapid
Arctic climate shifts and improved models are needed that give a more
detailed picture and timing of what to expect so we can better prepare
and adapt to such changes. Early loss of Arctic sea ice gives immediacy
to the issue of climate change.”

“There is no one perfect way to predict summer sea ice loss in the
Arctic,” said Wang. “So we looked at three approaches that result in
widely different dates, but all three suggest nearly sea ice-free
summers in the Arctic before the middle of this century.”

NOAA scientists explore the Arctic during a 2005 mission.

Overland and Wang emphasized that the term “nearly” ice free is
important as some sea ice is expected to remain north of the Canadian
Archipelago and Greenland.

"Some people may interpret this to mean that models are not
useful. Quite the opposite,” said Overland. “Models are based on
chemical and physical climate processes and we need better models for
the Arctic as the importance of that region continues to grow.”

Taken together, the range among the multiple approaches still
suggests that it is very likely that the timing for future sea ice loss
will be within the first half of the 21st century, with a possibility
of major loss within a decade or two.

NOAA’s mission is to understand and predict changes in the Earth's
environment, from the depths of the ocean to the surface of the sun, and
to conserve and manage our coastal and marine resources. Join us on Facebook, Twitter and our other social media channels

Resist Forum :: Climate Change - The FACTS :: Feedback Loops - Is This Game Over?

Still Made in USA

Made in USA Forever